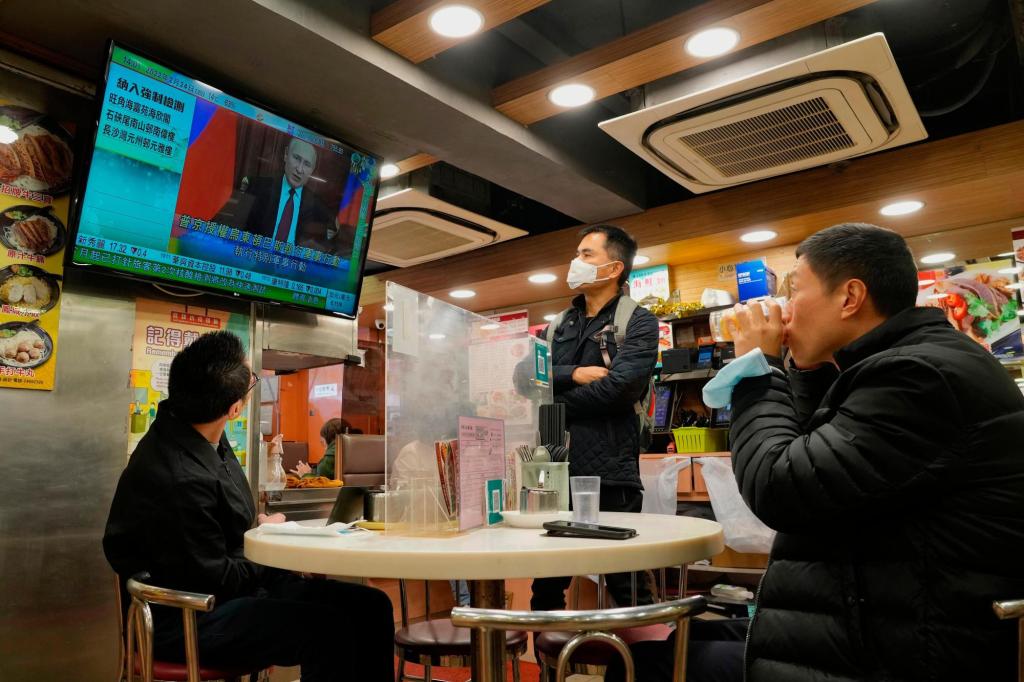 By RAF CASERT and SAM PETREQUIN

“Putin chose this war, and now he and his country will suffer the consequences,” US President Joe Biden said.

Almost in unison, the United States, the European Union of 27 and other Western allies announced a series of punitive measures against Russian banks and big companies and imposed export controls aimed at starving the country’s industries and military in semiconductors and other high-tech products. some products.

From the United States to Western Europe to Japan, South Korea and Australia, nations lined up to denounce the Kremlin as the outbreak of fighting raised fears about the shape of Europe to come. The invasion initially caused stocks to plummet and oil prices to rise for fear of rising food and fuel prices.

The West and its allies have shown no intention of sending troops to Ukraine – a non-NATO member – and risking a wider war on the continent. But NATO has reinforced its member states in Eastern Europe as a precaution against an attack on them as well.

“Make no mistake: we will defend every ally against any attack on every square inch of NATO territory,” NATO chief Jens Stoltenberg said.

Meanwhile, countries have begun taking steps to isolate Moscow in hopes of forcing it to pay such a high price that it changes course.

Biden, so far, has not imposed some of the toughest sanctions, including excluding Russia from the SWIFT payment system, which allows money transfers from one bank to another around the world. whole. Ukraine’s president has called for Russia’s expulsion from SWIFT, but the United States has expressed concern over potential damage to European economies.

Top Biden administration officials, including the secretaries of state, defense and treasury, briefed members of the US Congress in unclassified calls on Thursday.

“This is going to be a long battle that requires sustained action and unity,” Sen. Chris Van Hollen, D-Md., a member of the Foreign Relations Committee, said after the session with senators.

Many lawmakers have called for the toughest possible sanctions against Russia to stop the invasion. The senator said there was recognition “we can continue to build” on those Biden has already announced.

EU leaders held an emergency summit and agreed on sanctions that cover, among others, the finance, energy and transport sectors and various Russian individuals. In a statement, the leaders said the measures will have “massive and serious consequences” for Russia.

Details won’t be available until Friday at the earliest.

“We want to cut off Russian industry from technologies that we desperately need today to build the future,” said European Commission President Ursula von der Leyen.

Dutch Prime Minister Mark Rutte said: “It’s about Russia’s leadership and being ruthless in finances and the economy.”

Johnson called the attack on Ukraine “hideous and barbaric” and said of Putin: “Now we see him for what he is – a bloody aggressor who believes in imperial conquest.”

Canada has imposed sanctions that will target 58 individuals and entities, including members of the Russian elite and their families, the paramilitary group Wagner and major Russian banks. The punitive measures, announced after Prime Minister Justin Trudeau attended a virtual meeting of G-7 industrialized nations, will also cover members of Russia’s Security Council, including top cabinet ministers.

In the days leading up to the attack, Germany suspended approval of the Nord Stream 2 gas pipeline from Russia.

Along with Stoltenberg and Johnson, von der Leyen called the invasion a “barbaric” attack on an independent nation that threatened “stability in Europe and the whole international peace order”.

In addition, the UN Security Council is expected to vote on Friday on a resolution condemning Russia and demanding the immediate withdrawal of all its forces. But Moscow is certain to veto it.

Highlighting a growing rift in superpower relations, China remained alone in not condemning the attack and instead accused the United States and its allies of aggravating the crisis.

In a clear defense of Moscow, China “called on the parties to respect each other’s legitimate security concerns.”

Foreign Ministry spokeswoman Hua Chunying said ‘all parties should work for peace instead of escalating tension or exaggerating the possibility of war’ – language China always has used to criticize the West in crisis.

China went further and approved wheat imports from Russia, a move that could lessen the impact of Western sanctions. Russia, one of the biggest wheat producers, would be vulnerable if foreign markets were closed.

The possible repercussions went well beyond economics and geopolitics. The director of the Africa Centers for Disease Control and Prevention fears the crisis could further distract global attention from helping the world’s least vaccinated continent fight COVID-19.

In New York, an artist projects “Stand With Ukraine” and the country’s flag onto a wall at the United Nations headquarters. The artist, David Forsee, says he decided to do this because he is “a concerned person who doesn’t want to be surrounded by nukes”.

Associated Press reporters around the world contributed to this report.

Follow AP’s coverage of the Ukraine crisis at https://apnews.com/hub/russia-ukraine