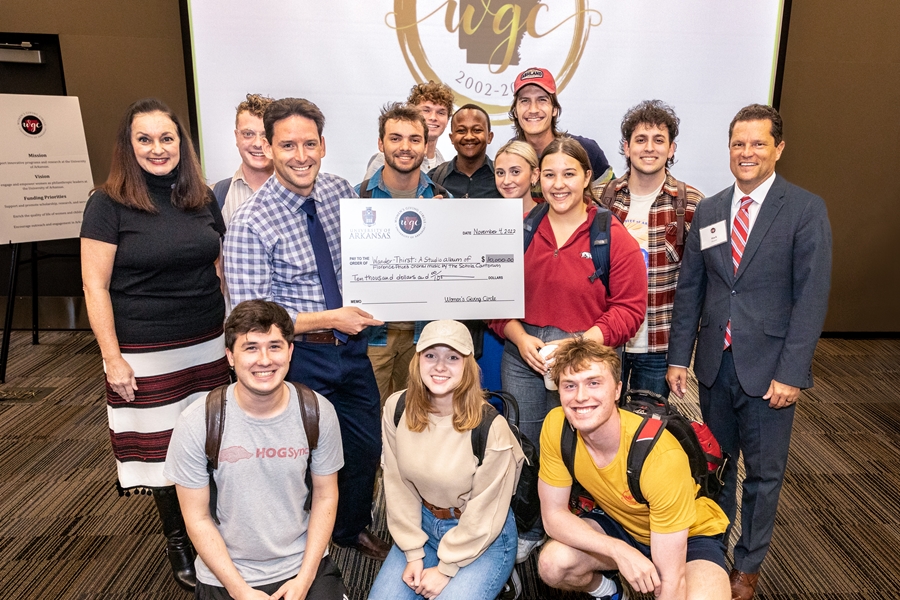 The Women’s Giving Circle celebrated its 20th year of funding Nov. 4 and awarded $100,000 to nine university programs and two on-campus scholarships at the University of Alberta.

The U of A Women’s Giving Circle celebrated its 20th year of funding innovative projects, programs and research last week by awarding $100,000 in its annual fall vote.

This year’s funding brings the group’s total to more than $1.7 million awarded since 2002.

The Women’s Giving Circle is made up of University of Alberta alumni, faculty, staff and friends of the university and was created to encourage women to become philanthropic leaders.

Circle members make annual contributions to generate funds for the awards, and these contributions are pooled and awarded each year to selected recipients who complete the grant proposal process.

This year’s winners were chosen from 18 submissions, with 13 finalists selected by online voting. Members of the Women’s Giving Circle heard presentations from the finalists at the event and then voted to select the winning programs. The amounts of the nine scholarships awarded this year ranged from $6,000 to almost $20,000.

Funding recipients this year include:

No-Auditory-Um: Assessing Indoor Acoustic and Spatial Environments in the University of Arkansas Auditorium – A proposal submitted by Jennifer Webb of the Fay Jones School of Architecture and Design, Rachel Glade of the College of Education and Health Professions and alum Jamie Zakovec, received $19,874.

This research project will assess the acoustic conditions in the university’s largest auditoriums in order to identify interventions that improve the academic performance and social inclusion of students and faculty with hearing loss.

Evaluation of ESTEEM, a self-esteem enhancement program for low-income women — A mentorship and education program designed to help women with limited resources gain the soft skills and knowledge needed to build confidence and thrive in life.

This proposal received $11,000 and was presented by Ananda Rosa from the School of Social Work, Merry Moiseichik from the College of Education and Health Professions and Sheila Posey, who is the Inspiration Director of ESTEEM – Empower Sisters Together to Encourage, Engage, and Move.

Wander-Thirst: A Studio Album of the Choral Music of Florence Price by the Schola Cantorum – A proposal submitted by Stephen Caldwell to the Fulbright College of Arts and Sciences received $10,000.

Funding for this project will help cover the production costs, including recording and final finishing, of the recording of Schola Cantorum choral music by Florence Price, a historically marginalized black composer from Arkansas.

Presented by Jacquelyn Mosley at the School of Human Environmental Sciences; Katherine Dilley of Dale Bumpers College of Agricultural, Food and Life Sciences; and Wendell Scales, who is assistant director of innovation for the Arkansas Lighthouse Academies. This proposal received $10,000.

Giving “meaning” to sensorimotor rehabilitation in virtual reality — A proposal submitted by Andres Pena and PhD student Aliyah Shell of the Institute for Integrative and Innovative Research received $10,000.

This research project aims to advance the use of virtual reality training in sensorimotor rehabilitation for people with a neurological disorder resulting in better access to rehabilitation, improving functionality, self-confidence and quality of life.

Art/Works! — A vocational arts integration program for at-risk high school students who learn the day-to-day operation of visual and performing arts facilities from experts in the field, serve the community by mentoring elementary school students and perform professional duties for performances and art exhibits at the Faulkner Center for the Performing Arts.

This proposal received $10,000 and was presented by Nicole Leachman at the Faulkner Performing Arts Center and Martha Sandven and Hung Pham at the College of Education and Health Professions’ Center for Children and Youth.

This innovative community-based educational program aims to reduce eating disorders, disordered eating, and weight-related stigma, which translates into improving the lives of women on campus.

Supporting People with Neurodiversity in Transitioning to Independent Living and the Workplace: Community Engagement in Program Development for EMPOWER at the University of Arkansas — A project to evaluate and create certificate programs that focus on hospitality and human development, giving people with neurodiversity the education and skills to gain gainful employment upon completion of the program.

The proposal submitted by Kelly Way and Jennifer Becnel of Dale Bumpers College of Agricultural, Food and Life Sciences received $7,000.

This program will enable mentors and mentees to identify a community need and lead a tangible service project by cultivating collaboration, team building, problem solving and leadership skills in all participants.

“The Women’s Giving Circle celebrates the incredible accomplishment of 20 years of giving,” said Kelly Chaney, chair of the WGC. “For 20 years, this group has had a significant impact on the people of Arkansas and across the country by funding 145 projects and three fellows. We are delighted to have had so many worthwhile projects to support this year with our pooled resources.

“I am proud to be part of this group of women philanthropists who make such a difference in the lives of others by coming together each year to vote where everyone has a voice. As we think about our next 20 years, I invite more women to join us and make a difference by funding these innovative projects and research.

About the University of Arkansas: As Arkansas’ flagship institution, the U of A offers an internationally competitive education in more than 200 academic programs. Founded in 1871, the U of A contributes more than $2.2 billion to the Arkansas economy through the teaching of new knowledge and skills, entrepreneurship and employment development, discovery through research and creative activity while providing training for professional disciplines. The Carnegie Foundation ranks the U of A among the few American colleges and universities with the highest level of research activity. US News and World Report ranks the U of A among the top public universities in the nation. Learn how the U of A is working to build a better world at Arkansas Research News. 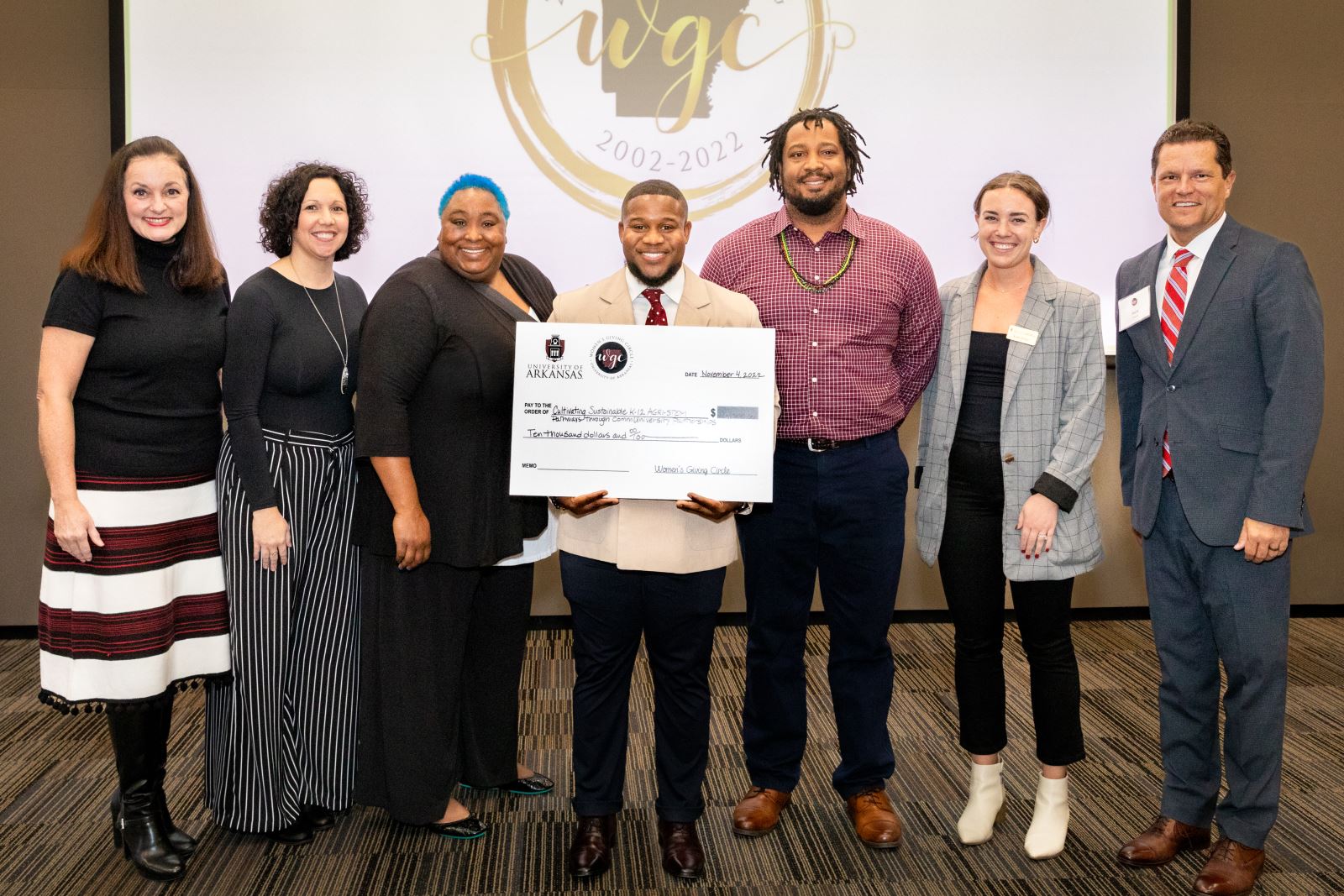