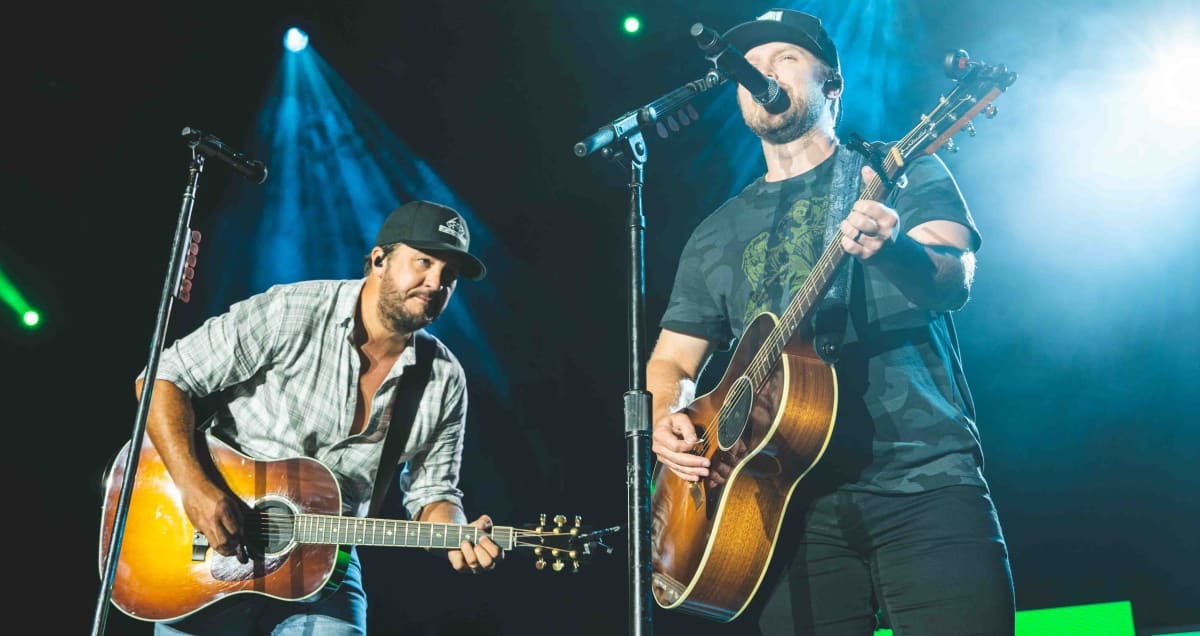 Jameson Rodgers shared a memorable moment on stage with Luke Bryan on the first night of Bryan’s Farm Tour.

Midway through Bryan’s set, the Mississippi native came out to join him in singing “Born Here Live Here Die Here.” At the time Rodgers co-wrote this song with Jake Mitchell and Josh Thompson, they had no idea it would end up being the name of Bryan’s 2020 record.

When their performance was over, the two artists hugged and Rodgers left the headliner to end the show.

Rodgers then shared a video of the moment on social media and revealed why being on that stage in Monroeville, IN and singing that particular song was a “full circle moment” for him.

Her caption read, “A few years ago I was driving for a county fair in Indiana. Passing by a small town on the way, my bass player told me “this is one of those towns where you are born and where you die”. The following week, I wrote a song called “Born Here, Live Here, Die Here”. Luke Bryan then recorded this song. Last night, I sang it with him for the first time in INDIANA. Full circle moments are the coolest.

This series of shows marks Bryan’s 13th birthdaye Farm Tour and Rodgers, Riley Green, the Peach Pickers and DJ Rock join him for the two-week break from his Raised Up Right tour.

“I look forward to these shows every year, mostly because of their significance and why starting the Farm Tour was important to me thirteen years ago,” Bryan said.

He continued, “It allowed communities that don’t normally get a gig in their area to experience a fun night in their backyard while elevating Farmer America. Small town and agriculture pretty much sum up my childhood. It’s my way of life and I know it’s a way of life for many. It’s really the highlight of my year for me and my whole team.

Ahead of his performance, Rodgers announced that he will be releasing his next song, “Things That Matter” on September 30.

“You’ve all been digging this one for a while now so I thought it was time to put it out!” he wrote on social media.

Before dropping the exciting news, he shared a snippet of the final song on Instagram and fans couldn’t hold their excitement any longer.

“It’s waking up with the woman I love / Talking to the man upstairs / Sipping coffee from my favorite cup / Slowing down the country / Going hunting with my old man / Kissing mom while I still can / I think I’ve finally figured it out / Life is ain’t about the money / I’m gonna spend a little more time chasing / The things that matter,” he sings in the chorus of the unreleased track.

The Farm Tour will continue to make several stops in the Midwest, including Michigan, Nebraska, Iowa and Minnesota, before Bryan resumes his Raised Up Right tour on September 29 in Estero, Florida.