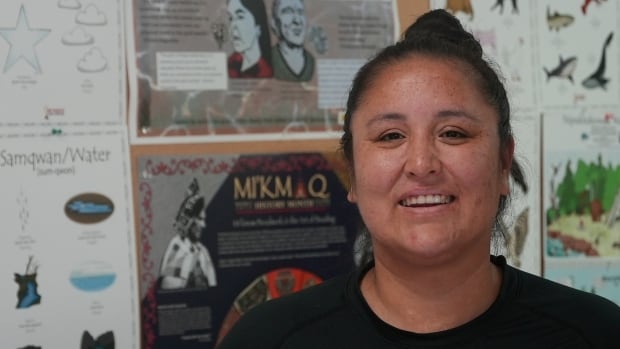 Ashley Sanipass connects most with the beadwork she made of two nosy bears – one of 12 pieces that represent the months of the Mi’kmaw calendar.

In English the month would be called September, but in Mi’kmaq it is called Wikumkewikuwhich translates to “the mating of animals”.

“I wanted to teach people the whole idea of ​​how our months are more descriptive than what we hear in English. I wanted to show people that part of the language,” said Sanipass, 37.

The Mi’kmaq artist from Indian Island First Nation, near Moncton, has been learning his language for several years.

Sanipass wanted to create something that would allow him to both share his language, which is known to be “verb-based”, and show how each calendar month is called something that is actually happening in the territory at that time. the.

From the croaking of frogs to the time animals begin to fatten up, she beaded an image of each month in a 12 piece circle.

She said the project, which took her 180 hours, also taught her how her ancestors used the land based on their description of each time of year.

Gerald Gloade, an elder from Millbrook First Nation in Nova Scotia, said it’s important for people to know about the Mi’kmaw calendar.

He said that each month is based on the moon’s journey around planet Earth, so instead of 12 months, there are 13 in a year. He said that in addition to reflecting what is happening, the calendar is also a guide.

“It’s about our way of life, where to be and when to be there — knowing what’s coming and what you need to do to prepare for it,” Gloade said.

He said that each Mi’kma’ki district may have different teachings on the earth, so their months and themes may differ.

He said sharing the teachings and stories depicted in the calendar honors elders and the calendar offers important lessons.

One of the challenges Sanipass faced was that some communities have adopted the 12-month calendar while others maintain a 13-moon calendar.

Sanipass said she tried to honor both by including the 13th moon in the center of her poster.

During her research, she spoke with elders from several communities and found common themes about the name of the month and how to represent the activity in her beadwork.

Sanipass began researching the calendar themes in March, and in September she began beading the various pieces. She struggled to bead concepts like the frosty month of November, but had a lot of fun beading the animal mating season where she beaded the loving bears.

She worked with the University of New Brunswick in Saint John to create the poster, which includes the name of the month in English, the Mi’kmaw word for the time of year and an English translation.

Her work is one of three pieces by Abenaki artists commissioned by the campus to be exhibited in January.

Sanipass said she had a lot of fun learning from the elders and language experts.

“The Mi’kmaq have such good humor and laughter sometimes when we talk about months and learning,” she said.

One of his language teachers is Vince Barlow from Indian Island. The Mi’kmaq elder said laughter is an important part of a language journey and he is proud of Sanipass.

He hopes to one day travel the poster with the Indian Island Mi’kmaw language group.

Sculpture stolen from the ND Museum of Art