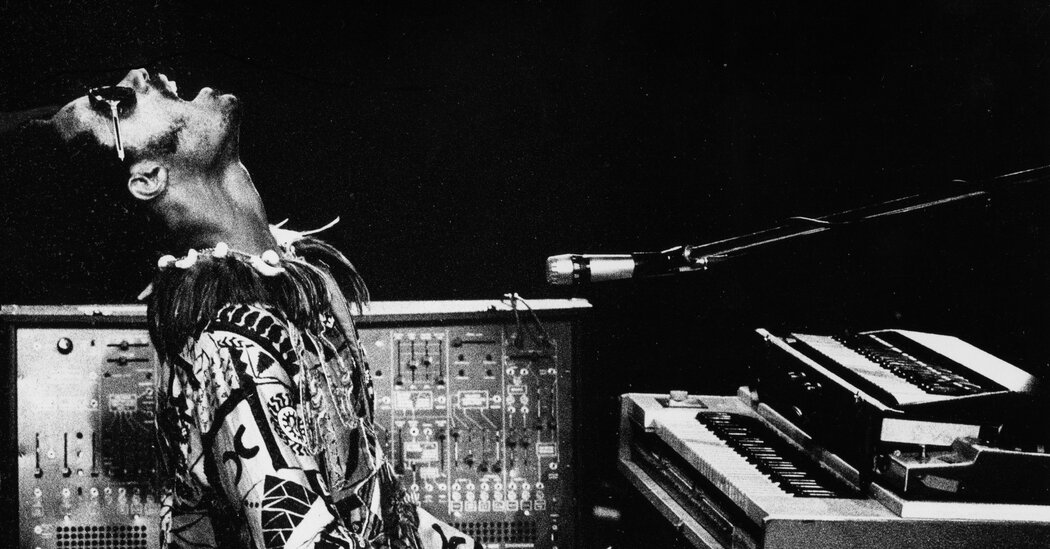 In 1972, half a century ago, Stevie Wonder reinvented the sound of pop by embracing everything he could accomplish on his own.

He released two albums that year: “Music of My Mind” in March and then, less than eight months later, on October 27, the even more confident and far-reaching “Talking Book.”

“Talking Book” was a breakthrough on several fronts. He demonstrated, with the international hit “Superstition,” that Wonder didn’t need Motown’s “hit factory” methods – songwriters and producers providing material that singers would dutifully perform – to have a pop blockbuster. #1.

Wonder had given signs on previous albums, particularly his self-released “Where I’m Coming From” (1971), that he would not just write love songs. “Talking Book” reaffirmed this, and also expanded its sonic and technological ambitions, as it used state-of-the-art synthesizers and an arsenal of studio effects to orchestrate its songs with startlingly new sounds. And his album cover — which showed Wonder wearing African-style dresses and braided hair in a quasi-Biblical desert landscape (actually Los Angeles) — made it clear that Wonder’s futurism was undoubtedly Afrofuturism.

Although Wonder had just reached voting age, he was no novice when he made “Music of My Mind” and “Talking Book.” They were his 14th and 15th albums in a decade-long career that stretched back to his days as Little Stevie Wonder, who was just 13 when he had his first No. 1 song with a live recording. irresistibly exuberant: “Fingertips, Pt. 2.”

During his teenage years, Wonder proved himself on stage and in the studio as a vocalist, keyboardist, harmonica player, and drummer, with hits like “Uptight (Everything’s Alright)” and “Signed, Sealed, Delivered (I’m Yours) “, like a songwriter. It revealed a musicality that was both rich and broadly grounded – in gospel, R&B, jazz, show tunes, folk, pop, country, classical music and more – and playful yet decidedly recombinant. Already a teenager, his music mixes and reconfigures genres.

Wonder’s first contract with Motown Records ended when he was 21 in 1971. Other labels were eager to sign him, and when he returned to black-owned Motown, he had gained creative control. complete for himself. From then on, he will write and produce his own songs, release albums when he deems them finished and choose his own collaborators. He makes an unexpected choice to start with: Malcolm Cecil and Robert Margouleff, a team of musicians, producers and engineers.

In what were still the early days of synthesizers, Cecil and Margouleff had built a Frankenstein monster of an instrument they called TONTO (which they renamed The Original New Timbral Orchestra). It weighed over a ton. Margouleff and Cecil had connected modules and keyboards from Moog, Arp and other manufacturers and found a way for the formerly incompatible devices to control each other. Posing as Tonto’s Expanding Head Band, Margouleff and Cecil in 1971 made an album of synthesizer tunes, “Zero Time”, and Wonder heard in it the possibilities of sounds he wanted to invoke from his keyboards.

During their trial – a three-day weekend working together in the studio – Wonder wrote 17 songs. From 1972 to 1974, with Wonder writing the songs and Cecil and Margouleff programming the sounds, they would make four landmark albums: ‘Music of My Mind’, ‘Talking Book’, ‘Innervisions’ and ‘Fulfillingness’ First Finale’.

The early 1970s were a very open – and in retrospect simply remarkable – era for R&B that merged social consciousness and musical creativity. Bands like Sly and the Family Stone and the Temptations of the late 60s had shown that psychedelic soul hits could convey strong messages, and by the early 70s songwriters like Marvin Gaye (with his album “What’s Going On”) and bands like Earth, Wind & Fire, Parliament-Funkadelic, the O’Jays and Labelle explored utopian dreams and street ideas in songs that united the sophistication of jazz with the land of funk and rock. These were parallel explorations, often with large stage and studio groups; meanwhile, Wonder found his own way, almost solo.

“Music of My Mind”, the first album under the new Motown contract, began to probe Wonder’s newfound freedom; then “Talking Book” reveled in it. It’s an album mainly of songs about love: euphoric, heartbroken, jealous, regretful, nostalgic, anticipatory. Yet love songs like “You Are the Sunshine of My Life” and “Lookin’ for Another Pure Love” aren’t just about the ups and downs of individual romance; their love can encompass family, friends, community and faith.

Midway through, the album wields a pair of unforgiving reality checks. In “Superstition,” Wonder warns against gullibility and received opinion, with a loose drumbeat, chattering stereo clavinets and sly horns making his advice as danceable as it is vehement. And in “Big Brother,” Wonder sings “I live in the ghetto” and rails against a moralizing politician who wants his vote but is “tired of me protesting/kids dying everyday.”

Wonder influenced generations of singers with his vocals on “Talking Book”; he talks, hums, teases, preaches, moans, barks, growls. It’s not exactly gospel, blues, soul, rock or jazz; it’s all at once, and it gives every note he sings an unpredictable life of its own. With keyboards, synthesizers and effects under his control – there’s wah-wah everywhere – Wonder could extrapolate his vocal inflections to the instruments he played.

Unlike some of the more orchestrated or serious R&B efforts of the early ’70s, “Talking Book” doesn’t sound vintage. Its arrangements are lean and contrapuntal, undamped, ensuring that each note earns its place both as a melodic line and as a rhythmic thrust. Yet their precision does not make them mechanical at all. Wonder only had a handful of additional musicians on “Talking Book,” but he crafts the sound of a bustling, multifaceted neighborhood largely on his own. And all of the production takes place in a surreal, elastic and immersive electronic space that is much more familiar now than it was 50 years ago.

None of this ingenuity would matter if the songs weren’t substantial and touching. Wonder sings about love going right — “In my mind, we can take over the world,” he says in “You and Me” — and love going badly wrong. The singer suddenly realizes he’s been tricked into “Maybe Your Baby,” with a bassline as slimy as quicksand and backup vocals that sound like know-it-alls. He was left alone in “Blame It on the Sun”, desperate to convince himself that it wasn’t his fault.

And the album ends with “I Believe (When I Fall in Love It Will Be Forever)”, a song in three episodes tinged with Beatles in which the singer recovers from “shattered dreams”, imagines the happiness of a love endlessly with a chorus of backing harmonies arriving to lift it up, invoke God, then segue into a bluesy come-on to “the girl I adore”. The romance is still hypothetical; pure joy is not. And every note comes from Wonder himself.

“Talking Book” was not only a hit album – No. 1 on the R&B chart, No. 3 on the Billboard 200 all genres – but also a harbinger of R&B and pop that would increasingly electronic and synthetic, proudly unbound by physical realities. One of Wonder’s many gifts to music was that even when he created the artificial sound worlds of his songs, he ensured they were brimming with humanity.

Here, 27 of the countless musicians and listeners who created and were inspired by “Talking Book” discuss the album song by song. These are edited excerpts from the conversations. — Jon Pareles