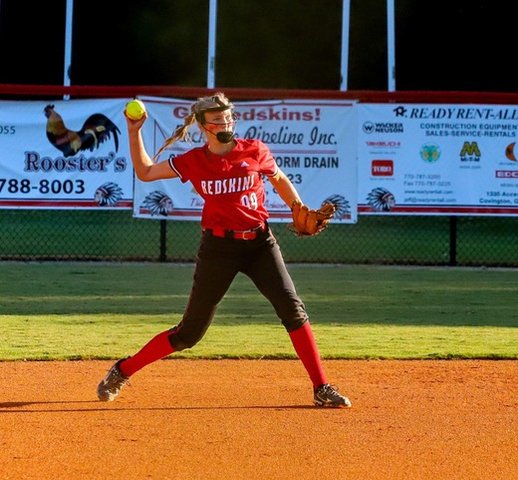 SOCIAL CIRCLE, Ga. — For most of the season, it’s been smooth sailing for the Social Circle Lady Redskins, finishing their out-of-region program with a 9-2 mark. All of that is behind them now that regional play has begun.

Social Circle is 2-1 to start its Region 5A-Division I slate with wins over Jasper and Oglethorpe counties and loss at Prince Avenue.

Head coach Chris Davis feels his team is in a “good position”.

The Lady Redskins began their regional schedule with an 11-2 win over Jasper County. Then, Prince Avenue got the better of Social Circle in a 1-0 pitching duel. The final regional contest was an extra leg, 4-3 win over Oglethorpe County.

In close games, Davis credited the competitive nature of his team that they displayed.

Kaylynn Scaffe and Madalyn Spinks believe there has also been a change in attitude with the start of regional play. Scaffe stressed the importance of each player’s desire to perform better for the rest of the season.

“It’s more serious,” Scaffe said. “There is a need to win. Even though everyone wants to win every game, now there is more need.

Scaffe went 2-for-4 at the plate and contributed three RBIs in the 11-2 win over Jasper County on Sept. 8.

Part of his performance featured a home run. The moment was also huge for Scaffe.

“It was my first home run of the school season,” Scaffe said. “It was very exciting and it makes me want to keep working harder to start again.”

The monarchy sends a message with the funeral of Queen Elizabeth: they live on