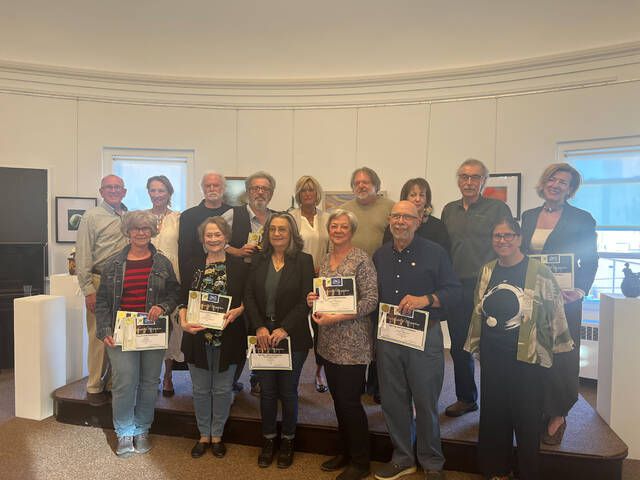 WILKES-BARRE — Laughter and jovial conversation echoed from the Circle Center for the Arts on Friday evening, as people gathered in person to enjoy the arts and spend time together.

The evening saw the opening of the “Falling Light” exhibition, on the second floor of the Sandra Dyczewski Maffei Gallery. The exhibition, which kicks off the year for the Circle Centre, features the work of husband and wife artists Renée Emanuel and Bill Teitsworth from Moscow.

Kicking off at 5 p.m., the crowd was certainly alive, enjoying the beautiful artwork adorning the walls and most certainly enjoying themselves after a long layoff from the in-person events.

Teitsworth was unfortunately unable to open, however, Emanuel was in attendance. Speaking of seeing people come together in unity in the name of seeing her art, she said: ‘It’s really a thrill because it’s one thing when you’re painting and you’re alone in the studio, but it’s It’s such a gift when you’re out and people can look at the work you’ve done.

Surrounded by the work of herself and Teitsworth, Emanuel explained that they work out of their Moscow studio as well as a repairman’s house they bought in Maine, where they reside part of the year. , until mid-October.

“We paint outside there during the summer and here (Moscow) too,” Emanuel said. Sometimes a painting starts outdoors and ends in the studio and sometimes it needs a little tweaking, but regardless of the process, Emanuel said it’s the light that really is the soul of a painting. painting.

“We learned to pay attention to light by being there and watching what it does in the tradition of Monet and other Impressionists,” Emanuel said.

More recently, Emanuel has taken up painting nocturnal scenes. She said, “There’s a mystery in the night.

The Falling Light exhibit will now run until May 25.

WVAL members submit five works and an invited jury selects the works for the gallery. Winners in different categories were announced and received a certificate, as well as a gold badge to pin to their artwork.

This year’s guest juror was Eileen C. Warren, who is currently an art professor and chair of the fine arts department at Wyoming Seminary, where she has worked since 1987.

In a released statement, Warren said, “It is with great honor and privilege to have been asked to judge the Art League Members Show. The artworks submitted are a fine example of the creative and talented artists in the community. »

WVAL President Don Armstrong noted that this year was the tenth year of their new home at the Circle Center at 130 S. Franklin St., and announced a slew of upcoming classes, events and programs for the everyone’s pleasure.

“For me, as president of this organization, it is wonderful to see the works of art that are exhibited as well as the people who have come to appreciate the arts. It’s wonderful to have a resurgence,” Armstrong said.

For more information on upcoming events and classes, you can visit the website at wyomingvalleyartleague.org.

Next up is Sunday at the Circle on April 24 from 3-6pm with live music courtesy of local musicians Jordan Ramirez and John Shemo.