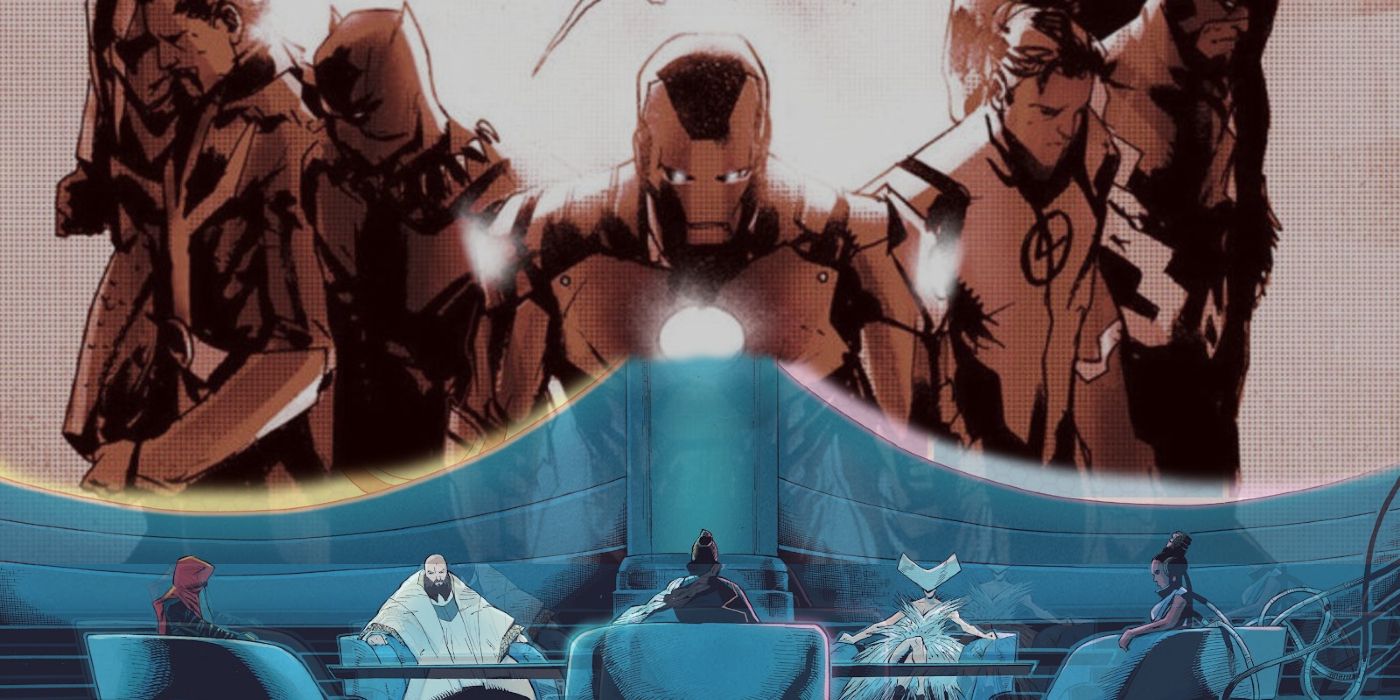 Warning: SPOILERS for Captain America and the Winter Soldier Special #1Marvel Comics reveals the origins of the sinister new group that replaced The Illuminati as the Marvel Universe’s new secret cabal: the outer circle. After pulling the strings of the world for a century, the Outer Circle has been exposed by Captain America and the Winter Soldier, but their threat is more dangerous than ever.

The Illuminati were the most important group in the Marvel Universe before the Secret Wars event and the All new, all different to restart. Composed of the most powerful and influential superhuman leaders in the world, the Illuminati formed after the Kree-Skrull War and consisted of Iron Man, Doctor Strange, Black Bolt, Charles Xavier, Reed Richards and Namor, with Captain America and Black Panther briefly joining at a later stage. Their purpose was, initially, to share information and strategy, but the Illuminati also acted preemptively to protect the Earth from its worst threats. This noble mission did not make the existence of the Illuminati any less controversial, as they were in fact a secret cabal of superhumans with the self-proclaimed power to decide Earth affairs. While members of the Illuminati have shown at least a measure of moral dilemma over their role, the outer circle has no such qualms.

VIDEO OF THE DAY

Related: Marvel’s Illuminati Are Re-Forming To Eliminate The X-Men

Featured as a group of mysterious villains in the Captain America: Sentinel of Freedom ongoing series, the origins of the Outer Circle were revealed in Special Captain America and the Winter Soldier #1, by Jackson Lanzing, Collin Kelly, Kev Walker and KJ Dìaz. In 1922, motivated by the senseless destruction wrought by World War I, Prince Wulf Fortunov of Latvia assembled a small group of the world’s most influential people: the first multi-billionaire, Etienne Argent; a former Wakandan chief engineer, Ika Agboje; Europe’s most influential artist, Ana; and Gavrilo Princip, the revolutionary who started the Great War by shooting Archduke Franz Ferdinand. Together they have become Power, Money, Machine, Love and Revolution, an “outer circle” whose goal is to control everything, guiding the world towards what they believe to be a better future.

The outer circle is even worse than the Illuminati

What sets the Outer Circle apart from other similar shady cabals is that they don’t actually work together. Instead, they’ve devised a complex system of rules that ties them together in what they call “the Game of the Century”, in which each member makes their choice. The creative team of Captain America: Sentinel of Freedom Perhaps he went a bit too far in describing the scope of the Outer Circle, as they seem responsible for all major events of the last century, including the creation of Captain America himself. However, this makes the Outer Circle the perfect replacement for the Illuminati, who no longer appeared in the afternoon.Secret Wars continuity. If the Marvel Universe needs big, untouchable villains pulling the strings from the shadows, then the Outer Circle is a perfect fit, as they’re all new characters with lots of development potential.

Of course, the appeal of the Illuminati was that they weren’t real bad guys, or at least didn’t think of themselves as such. They firmly believed that they were acting for the good of humanity, which is apparently also the motivation of the Outer Circle. However, while The Illuminati still had moral dilemmas about how they justified their own actions, the outer circle (with the exception of the Winter Soldier, who took over the seat of the Revolution) has no such issues, making him an even greater threat to the Marvel Universe.

Special Captain America and the Winter Soldier #1 is available now at Marvel Comics.